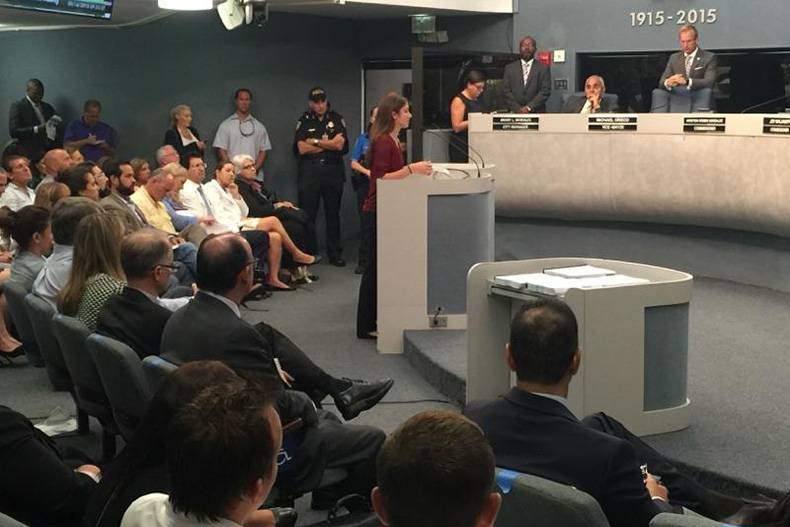 University clinicians and researchers urge a proactive approach to controlling the Zika virus.

Controlling the mosquito-borne Zika virus must continue to be a public health priority for South Florida, according to several University of Miami Miller School of Medicine clinicians and researchers who spoke Wednesday at a public hearing held by the Miami Beach City Commission.

“We would not be here today if Zika were not a serious problem,” said Christine L. Curry, M.D., Ph.D., assistant professor of obstetrics and gynecology, who consults with the state Department of Health (FDOH). “We are having this conversation because Zika has spread to 70 countries, and more than 20 of them report birth defects.”

Throughout the four-hour hearing, community activists chanted, “No more Naled,” referring to an insecticide used to kill the Aedes aegypti mosquito, which spreads the Zika virus, as well as dengue fever, chikungunya and yellow fever. They expressed deep concerns about the health risks from aerial spraying of Naled over central Miami Beach as part of the state’s emergency mosquito control protocol, which includes truck spraying with other chemicals and door-to-door inspections to eliminate mosquito breeding grounds.

“We want to hear from the scientific experts about all the options,” said Miami Beach Mayor Philip Levine, noting that the city invited representatives from the University of Miami, Florida International University, Miami-Dade County and the state Department of Health. Experts from the Florida Department of Agriculture, the U.S. Environmental Protection Agency (EPA) and the Centers for Disease Control and Prevention (CDC) took part in the hearing via a conference call.

Later in the day, Miami Beach commissioners unanimously passed a resolution calling for examination of alternatives to aerial spraying and urged the formation of an independent scientific panel to advise on the future options. A motion to file a preliminary injunction to halt the aerial spraying for two weeks was defeated.

During the hearing, UM experts urged continued action to address the public health risk posed by the Zika virus.

“We live in a tropical climate that is very different from most of the country,” said Paola N. Lichtenberger, M.D., assistant professor of clinical medicine and director of the Tropical Disease Program. “I don’t want Zika to get out of hand and it become an endemic disease in our community.”

Ivan A. Gonzalez, M.D., assistant professor of clinical pediatrics and a specialist in pediatric infectious diseases, agreed with the need for a proactive approach.

“We already know that Zika has a serious impact on babies and children,” he said. “Because we are still learning about this virus, we may well find more problems in the future.”

Sunil Rao, Ph.D., professor and interim chair of the Department of Public Health Sciences, told the commissioners he reached out to academic colleagues across the country to estimate the impact of Zika on Florida if nothing is done to control the spread of the virus.

“They used a variety of models, with a consensus estimate of 79 locally transmitted Zika cases in Florida,” he said. “However, several of the models indicated there could be up to 200 infections this year.”

Every day there is growing evidence that a Zika virus infection during pregnancy causes adverse outcomes, including microcephaly, other damage to the brain, and hearing and vision loss, said Peggy Honein, Ph.D., M.P.H., an epidemiologist and chief of the Birth Defects Branch at the CDC.

“While we have reports on the linkage from countries around the world, we don’t yet know the magnitude of that risk,” she said.

Davis Daiker, Ph.D., chief of the Bureau of Scientific Evaluation and Technical Assistance in the Florida Department of Agriculture, said the level of Naled used for mosquito control—about two-thirds of an ounce over an acre—is far below the levels used to treat farmland.

“Aerial Naled spraying represents a negligible risk to the public,” he said, noting that the pesticide was applied to more than 6 million acres in Florida in 2014 without any reported adverse effects on fish, birds, mammals, bees or humans.

Later in the hearing, Douglas O. Fuller, Ph.D., professor of geography and regional studies and senior associate dean of the UM College of Arts & Sciences, said the county’s aerial spraying plan is in line with protocols developed by the World Health Organization (WHO).

“By controlling the mosquitoes, we can break the chain of transmission,” he said. “There are experimental approaches being tested—including sugar traps with non-toxic boric acid—but these are not yet available or ready to be deployed in an emergency situation.”

Alina Hudak, deputy mayor of Miami-Dade County, also said the aerial spraying protocol needs to run its course. “There are times when there are no great choices available,” she said. “We take our responsibility to protect people very seriously, and this virus must not be allowed to spread.”