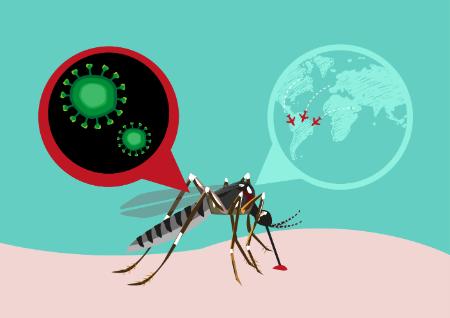 By College of Arts and Sciences News —

The alert is out and South Floridians are taking heed. With the Centers for Disease Control and Prevention (CDC) issuing a warning for visitors and locals to avoid a neighborhood in Miami after more than a dozen individuals contracted Zika, a team of University of Miami researchers have presented a new study that shows how the flow of visitors through a popular place, such as the affected Wynwood area of Miami, determines the eventual severity and duration of such an outbreak.

The study entitled, “Anomalous contagion and renormalization in networks with nodal mobility,” was published in the journal Europhysics Letters on August 1 while a related paper by the same team will appear shortly in Physical Review E.

Neil Johnson, a physicist at UM’s College of Arts and Sciences, says the research proposes “a new contribution to introduce, model, and understand the interplay between the flow of people through, and the occupancy of, popular places such as airports, hospitals, and schools.” Though the immediate interest is in the current Zika outbreak in Miami, Johnson adds that their results apply equally to popular online areas on social media, which triggered outbreaks of on-street protests.

Pedro Manrique, a postdoctoral associate in the physics department and first author of the study, explains: “Our research shows that the length of time that visitors linger in a popular place can have a highly counterintuitive effect on the number of people eventually infected. Being present in the popular place is what makes people susceptible to the infection, and under certain circumstances, we find that the best solution is to increase the flow of people in and out of the popular place—not to reduce it as one might expect.”

Manrique goes on to explain that the contagion process that the team studied covers a spectrum of phenomena, from viruses like Zika to extreme political ideas discussed in online chat rooms that then lead to outbreaks of violent civil disorder.

Johnson points to the current Zika outbreak in the Wynwood Arts District, which is undergoing a public health alarm with 14 cases likely caused by local mosquitoes. The model presented in the study focuses on two potential mechanisms for infection. One mechanism is person-to-person infection, which is when an uninfected mosquito bites an infected person and then carries and spreads the disease to other people. Broadcast, the second mechanism, refers to infection from infected mosquitos in an actual place.

“One would think the best strategy would be to reduce the flow of people through the Wynwood neighborhood so it is effectively under quarantine,” said Johnson. “But obviously, this is completely impractical. The question then shifts to: How should we control the flow of people through the popular place so that we keep relatively high occupancy, and yet the risk of spread is minimal?”

The study presents two distinct strategies that can be applied to such a scenario in order to reduce the outbreak severity. The first corresponds to decreasing the mobility through the popular place, meaning that visitors would spend far longer in the popular place and hence would be closer to recovery before moving on. The second corresponds to increasing the mobility through the popular place, meaning that visitors have less chance to become infected during their visit. It is the second scenario that the team believes corresponds to the Wynwood case for Zika, and they are now trying to pin down the numbers for this specific case.

“Since the results depend on precisely what disease you are trying to control, our work shows that any answer related to these scenarios cannot be guessed. Instead, our study gives a precise recipe for what is best according to what officials wish to achieve in terms of trying to reduce both the duration and severity of the outbreak,” said Johnson.

Manrique and Johnson collaborated with Hong Qi and Minzhang Zheng, both with the UM physics department, as well as Chen Xu and Pak Ming Hui at the Chinese University of Hong Kong Physics Department.